Some patients with symptoms heart failure have an abnormality of the hearts electrical system. The most common abnormality is a delay in electrical conduction through the left bundle branch which is a section of the heart’s wiring system. This condition is also called a Left Bundle Block (LBBB). Because the electrical signal to the left ventricle is delayed, the right ventricle begins to contract a fraction of a second before the left ventricle instead of simultaneously. This uncoordinated work of the ventricles further reduces the heart’s efficiency of an already weakened heart muscle in CHF patients.

A traditional pacemaker has one or two leads that are placed into the right side of your heart. One lead is placed into the lower right chamber (right ventricle). A second lead may be placed into the right upper chamber (right atrium). A CRT pacemaker (CRT-P) has an additional lead placed on the left side of the heart to make the left ventricle beat at the same time as the right. This can restore your heart’s coordination so it pumps efficiently. Because of this additional lead it takes up to 2 hours to implant a CRT pacemaker. 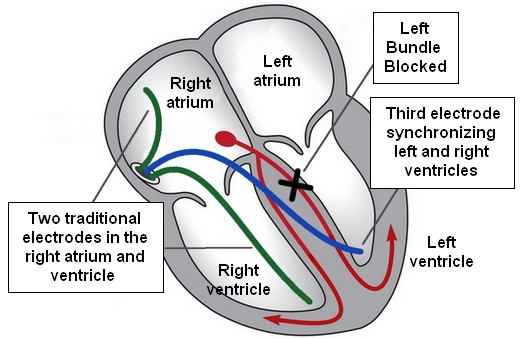